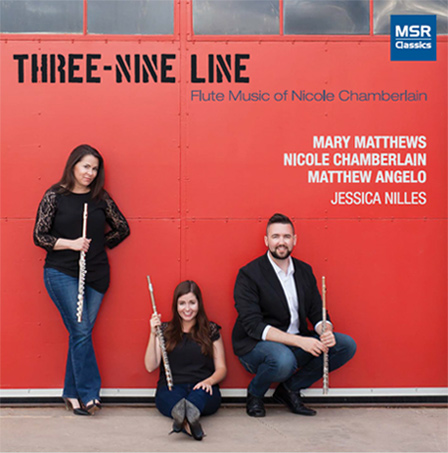 Sheet music from the album:

Thanks to our donors for making this album possible!

And many donors who wished to make their contributions anonymous

LILLIPUTIAN for piccolo and music box (2016)

Laurence Vittes, Gramophone Magazine [October 2018]
"Nicole Chamberlain's portfolio of prize-winning pieces for flute is a lovely bouquet to the flautist's art... being a virtuoso flautist herself has informed her ability to write for the instrument with thrilling facility and endearing charm. Chamberlain and her brilliant crew might even have changed the mind of that notorious flutophobe Mozart... Chamberlain crafts engaging intros which morph into often athletically demanding tour-de-force displays of what a flute, or two or three, can do when they're just playing around... The standout is a stand-alone piece, 'Mintaka', which rises above the others in the sheer intoxication with which Matthews, Chamberlain and Matthew Angelo capture the sexy energy of the flamenco. [The recordings] are brilliant and clear, and the booklet notes supply all the engrossing details."

Tammy Evans Yonce, The Flute View [September 2018]
"a well-executed introduction to this composer's distinctive style... a fun collection and representation of Chamberlain's works... there is considerable variety and something for everyone. Chamberlain's music also heavily utilizes extended techniques [that] play into the theme or story of each piece to sonically enhance its meaning... Since Chamberlain is a flutist, her writing is idiomatic for the instrument. Overall, this is a fun, light album with solid performances by all involved."

Jessica Dunnavant, The Flutist Quarterly [Summer 2018]
"The music of Nicole Chamberlain is exciting and vibrant... The playing throughout is marvelous, expressive and acrobatic... Three-Nine Line is a is a wonderful album. It's exciting, inspiring, and a wonderful glimpse into the world of flutist and composer Nicole Chamberlain."

Mark J. Estren, InfoDad [August 2018]
"(++++ / 4-Stars) It has to be said at the outset that Chamberlain plays her chosen instrument with considerable skill and a great deal of understanding of exactly how it produces sounds and what those sounds can be... Chamberlain loves showing non-traditional ways in which the flute can be played: she draws attention to breathing, does that breathing in a wide variety of ways, taps and knocks the instrument to use it percussively, contrasts brief legato and frequently tonal elements with staccato, atonal ones and some that are genuinely and intentionally unpleasant to hear... Chamberlain and her companions all sound as if they revel in the sonic explorations of the material, and other performers will surely find the disc intriguing."

Flute Talk [June 2018]
"Mintaka is a virtual tour de force. The performance is exciting and the playing terrific. [Lillipution is] delightful... breathtaking... there are some treasures here."

Nicole Chamberlain maintains an active career as a composer and flutist. As a composer, she won the 2010 Audience Favorite award at the Atlanta Opera's 24-Hour Opera Project for her opera, Scrub-A-Dub Raw, which resulted in the Atlanta Opera's first commission of a children's opera, Chamberlain's Rabbit Tales. The work received more than 50 performances, effectively launching her career. She has been commissioned by numerous other ensembles, including the Georgia Symphony Orchestra, Oklahoma Flute Society, Atlanta Flute Club and Cuatro Puntos. A frequent award-winner, Chamberlain took first place in the 2013 Areon Flutes Composition Competition, 2015 Flute View Composition Competition and 2017 National Flute Association Flute Choir Composition Competition. She took second place in the Flute New Music Consortium Composition Competitions in 2014 and 2016. As a flutist, Chamberlain has performed with the Georgia Symphony Orchestra, LaGrange Symphony, Gwinnett Ballet, duoATL, Mercury Season, Terminus Ensemble, Chamber Cartel, Perimeter Flutes and Capitol City Opera, and in collaboration with numerous performing artists. In the master class setting, she has worked with Charles Wuorinen and Joan Tower. Chamberlain received her Bachelor of Music degree in music composition from the University of Georgia, studying with William Davis, Leonard Ball, Lewis Nielson and Roger Vogel. www.nikkinotes.com

Mary Matthews is an accomplished flutist, new music advocate and pedagogue. She has performed in recital at Carnegie Hall, Sydney Conservatorium of Music, Fundação Universidade do Sul de Santa Catarina in Brazil and Festival Goethe Institut Música Nueva and Jornadas de Música Contemporánea in Bolivia, among others. Matthews has also performed at the Newport Music Festival, Maryland Wind Festival, New Music Gathering and at five National Flute Association conventions. A dedicated chamber musician, she is a founding member of Duo Rossignol with soprano Hillary LaBonte and regularly collaborates with musicians around the country. Matthews was appointed principal flutist of the Hartford Independent Chamber Orchestra during the 2012-2013 season, and in this capacity has collaborated with some of New England's leading new music organizations. She has won numerous performance competitions, including the International American Protégé Woodwinds Competition, South Carolina Flute Society Young Artist Competition, Kathryn E. MacPhail Young Artist Concerto Competition and Firelands Symphony Orchestra Young Artist Competition. Over the course of her career, she has received numerous performance, research and community outreach grants. Matthews began flute studies at the Eastman School of Music's Preparatory Program where she graduated with distinction in performance. She holds a Doctor of Musical Arts degree from The Hartt School, a Master of Music degree from the Peabody Institute of the Johns Hopkins University and a Bachelor of Music degree from the Baldwin Wallace Conservatory of Music. www.MaryMatthewsFlute.com

Matthew Angelo is a highly versatile orchestral, chamber and solo flutist. He has performed across the United States and internationally in notable venues, including the Kimmel Center for the Performing Arts and New Jersey Performing Arts Center. Angelo has performed with the Bay-Atlantic Symphony, Hartford Independent Chamber Orchestra and is the second flutist of the Liberty Wind Symphony. Angelo is a member of the Manor Winds woodwind quintet and during the summer season performs with the Maryland Wind Festival. He performed to high acclaim with flutists Nicole Chamberlain and Mary Matthews at the 2016 National Flute Association Convention in San Diego. A strong advocate of new music, he has been involved in numerous world premiere performances. Also a dedicated chamber musician, Matthew is the co-founder of the Peroledi Duo with saxophonist Alyssa Hoffert. The Duo gave their international debut performances in 2016, presenting recitals at the Foundation des Etats-Unis of the Cité Internationale Universitaire de Paris. In 2015, they were invited to perform at the Navy Band International Saxophone Symposium in Washington, D.C. Angelo holds a Master of Music degree from The Hartt School and a Bachelor of Music degree from West Chester University of Pennsylvania. www.MatthewJAngeloFlutist.com

Jessica Nilles is an active soloist, performing regularly in notable venues, including the Esterházy Palace in Austria in a program of works by Beethoven. A strong advocate for new music, Nilles frequently performs in Pendulum New Music concerts at the University of Northern Iowa and with the Colorado New Music Ensemble, with which she collaborated in a production of Paul Moravec's Tempest Fantasy. She has performed with numerous instrumentalists and singers, including University of Northern Iowa music faculty in A Night at the Opera and with Wartburg College's Artist-in-Residence, Simon Estes, with whom she performed at the White House and on tour throughout Iowa. During her time on faculty at Wartburg College, she performed at the Easter Sunrise Service at the Red Rocks Amphitheatre and joined the Wartburg Choir in performances at the National ACDA Conference. A native of Webster City, Iowa, Nilles is pursuing a doctoral degree in piano performance at the University of Colorado Boulder, studying with Andrew Cooperstock. She currently holds degrees in piano performance and pedagogy from the University of Oklahoma and piano performance from Wartburg College, where she served as adjunct piano faculty in the 2016-2017 academic year.