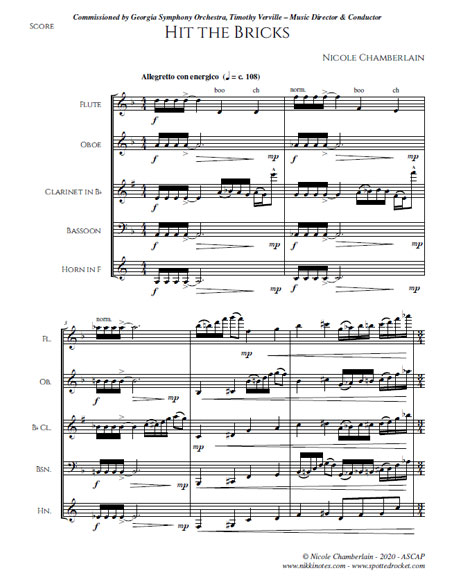 Hit the Bricks was commissioned by Georgia Symphony Orchestra under the direction of Timothy Verville to be recorded and released during the Fall of 2020 during a pandemic when live performances with large ensembles are not advised in order to reduce the spread of Covid-19.

The piece was set to be recorded outside of a venue called the Brickyard. It seemed only fitting to use the phrase "hit the bricks". The phrase has evolved since its origin and has multiple interpretations. Originally, it was meant to leave abruptly. But it has also evolved to mean to go find a job or to protest. Two things that people have had to do during 2020.

There is also an homage to the city of Marietta, Georgia. For example, every year on July fourth a replica of the Liberty Bell found in Marietta Square is rung thirteen times to represent the original thirteen colonies. Towards the end of the piece, the horn sounds concert F thirteen times in a row. Marietta also has ties to the railroad, that is reflected in the flute, clarinet, and horn grouping together to mimic the train horn using straight tone and lip bends.