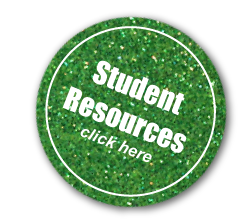 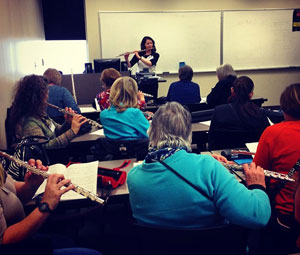 I currently only have slots available on Tuesday afternoons in Doraville and Thursday evenings at Hopewell Middle School for Hopewell students, but can put students on a waitlist for other times as they come available.

Nicole teaches flute and composition at her home in Doraville/Chamblee/Tucker area and at Hopewell Middle School in Alpharetta. Nicole is also available for lessons through Skype if you are not available in the Atlanta area. If you would like to schedule a lesson with Nicole you can contact her on the Lessons Inquiry page.

Nicole teaches students of all ages from ages 8 to adult. Younger children are encouraged to begin on recorder first, but Nicole has experience teaching recorder as well! Only students who can commit to at least one lesson a week will be considered for acceptance into the studio. 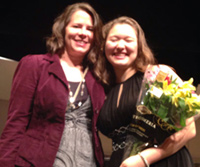 Nicole is also an award winning composer who includes music theory and composition in her flute lessons. 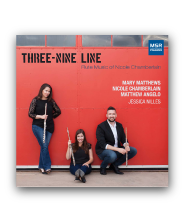 Nicole's album "Three-Nine Line" released by MSR Classics, and its available on iTunes and Amazon.

Have a question? Contact Nicole through the Lesson Inquiry page

8.14.2019
Videos for the 2019 GMEA 1st etudes are all posted in Student Resources Page. Start practicing, and don't forget your scales!

5.14.2018
Student recital is June 2 at 4pm at my house. I'm looking forward to hearing everyone's performance!

8.30.2018
Videos for the 2018 GMEA 1st etudes are all posted in Student Resources Page. Start practicing, and don't forget your scales!

8.20.2014
The 2015 GMEA 1st etudes are all posted in Student Resources Page. Yes! They are the same as the 2012 etudes, with the exception of the middle school etude which is shorter this year. Enjoy!

2.19.2013
The Atlanta Flute Fair is this Saturday 2/23 at Georgia Perimeter College Clarkston Campus! Gary Schocker is the guest flutist. Bring your flute and music and you may get a chance to work with him in the masterclass. I will also be performing with my flute quartet, Perimeter Flutes, at 11:15am. Visit www.atlantafluteclub.org for more information!

9.18.2012
I'm performing with Perimeter Flutes at the Kopleff Recital Hall at Georgia State University at 8pm! I'd love to see you there!

9.1.2012
Middle School & High School Students! All-state registration is just around the corner. Make sure you let your band director know that you want to audition for All-state!