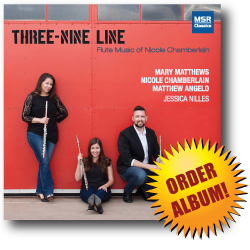 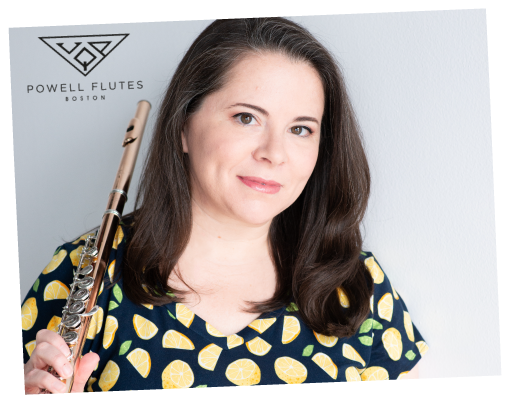 Nicole Chamberlain is an Atlanta composer and flutist on the rise. Her works have been commissioned and performed by the Atlanta Opera, Georgia Symphony Orchestra, Alias Chamber Ensemble, Winthrop University, and many others. Nicole is always looking for new commissions and performance opportunities!
Since performances are cancelled or postponed for the near future, catch me livestreaming
on Twitch

07.06.2020
Digital world premiere of my composition "Everything is fine." for woodwind quintet commissioned and performed by Maryland Chamber Winds. You can watch the video of the performance here.


05.21.2020
National Flute Association's 2020 Newly Published Music Competition results are out: Salty for flute and clarinet won the mixed duets category, To Love Is to Act for alto flute and vibraphone made finalist in the low flutes category, and Imperial Topaz for contrabass flute got an honorable mention in the low flute category. Thanks to my commissioners and premiere performers who made the new music possible! 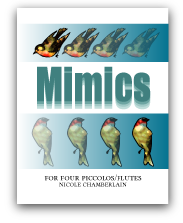 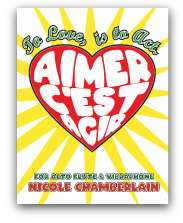 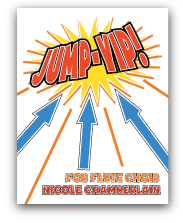 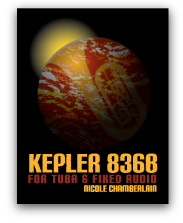 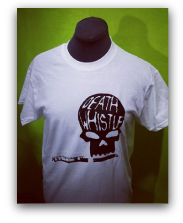 10.04.2019
Get the Death Whistle Tshirt and strike fear in all of your musician colleagues when you show up to your next rehearsal with your piccolo, aka the Death Whistle. Perfect for Halloween!

Apply now to participate in the Flute Speakeasy Workshop at the 2019 National Flute Association Convention in Salt Lake City, Utah with hosts Nicole Chamberlain, Valerie Coleman, and Amanda Harberg. All flutist who create their own music through composing and/or improvising are encouraged to apply. Deadline is July 12, 2019.

01.28.2019
Nicole Chamberlain is a officially on the roster as a Powell Flutes Artist. Contact Nicole about having her out to your school, flute fair, or university. 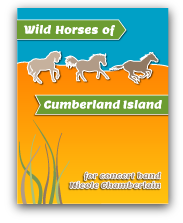 01.28.2019
Wild Horses of Cumberland Island for concert band commissioned by Hopewell Middle School Symphonic Band under the direction of Audrey Murphy and which premiered at GMEA is now available here. 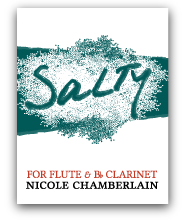 01.21.2019
Salty for flute and clarinet commissioned by the PM Woodwind Project is now available here.

10.22.2018
My composition Death Whistle is one of the pieces required for the preliminary round of the Chicago Flute Club's 2019 Walfrid Kujala International Piccolo Competition. Learn more here 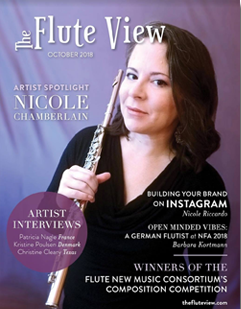 10.03.2018
I've been featured on the cover of the October issue of The Flute View. You can also read an interview about recent projects and what a day in my life looks like here. You will need to be a subscriber to read the article. 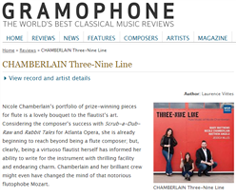 09.26.2018
Gramophone Magazie gave our debut album "Three-Nine Line" a glowing review. We're excited about how well the album has received. You can get your own copy of our albume here. Or you can get get the digital download on Amazon or iTunes. We hope you enjoy listening to it as much as we enjoyed making it. 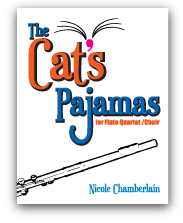 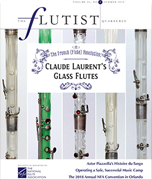 07.03.2018
Our album, "Three-Nine Line" got glowing reviews in the summer issue of the National Flute Association's Flutist Quarterly magazine by editor and reviewer Jessica Dunnavant. My composition Chivy for flute choir also got glowing reviews. If you're a member of NFA you can read the magazine online here. We loved working on the album and we're happy people are enjoying listening to it.

05.08.2018
Chivy for flute choir won the National Flute Association's Newly Published Music Competition in the flute choir category. Capsaicin for two flutes and cello was awarded honorable mention in the trios with other instruments category.

04.16.2018
I was on WABE 90.1 FM on Friday being interviewed about the new album. You can listen to the interview here, my segment starts at about 29 minutes in. 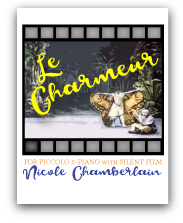 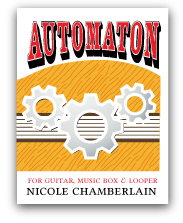 02.28.2018
Automaton for solo guitar, music box, and looping pedal that was commissioned by guitarist Brian Smith is now available for purchase here. 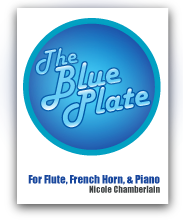 02.14.2018
The Blue Plate for flute, french horn, and piano that was commissioned by the Kitchen Sync and premiered at the Southeastern Horn Workshop is now available for purchase here.

9.26.2017
Bring me to your school, flute fair, or university. I offer presentations and worskshops to help fellow musicians find a new way to practice using extended techniques or carve out a living as a freelance musician. You can learn more here. 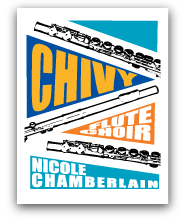 8.15.2017
Chivy for flute choir is now available here! It was the winner of the NFA's 2017 Flute Choir Composition Competition. It was premiered at the 2017 National Flute Association's Convention in Minneapolis, MN.

5.09.2017
I'm recording an album of my flute music with flutists Mary Matthews and Matthew Angelo this summer! We need some help with the expenses. You can learn more how you can contribute to be a part of this project here. We would like to thank all of our donors who really kickstarted this campain! 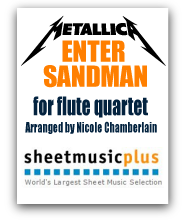 4.27.2017
Metallica's "Enter Sandman" arranged for flute quartet sheet music is now available here. This is a part of the 2017 Chamber Music Contest sponsored by Sheet Music Plus. The winner will be decided by who had the most sales between now and June 24. So please don't put off buying this flute quartet for fall semester. It will surely be a crowd pleaser!

4.10.2017
My new piece Chivy for flute choir won the National Flute Association's Flute Choir Composition Competition. The piece will be premiered at the NFA Convention in Minneapolis, MN on August 13, 2017.

2.17.2017
Secured rights to Piazzolla's Libertango through Sheet Music Plus. You can now purchase my arrangement of it for flute quartet/choir here.

12.15.2016
Featured on Flute New Music Consortium's Composer Spotlight. I never counted that I had 71 works for flute! 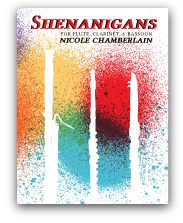 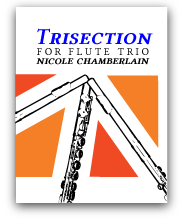 09.08.2016
Asphyxia for solo flute was awarded Honorable Mention by the Flute New Music Consortium's 2016 Composition Competition in the solo category.

08.19.2016
Hear something of mine at the NFA Convention in San Diego? You can find all of those pieces here!

07.23.2016
I will be at the 44th Annual National Flute Association Convention at the at the Town and Country Resort & Convention Center in San Diego, CA. I will have 6 pieces performed (3 premieres) and performing. You can see a list of performances and the pieces here. 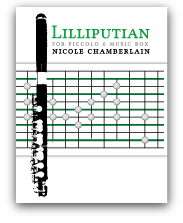 Video tutorial on how to set up the music box here. Glockenspiel, toy piano, or celesta can substitute for the music box. 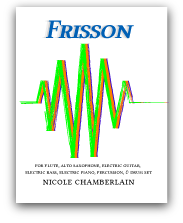 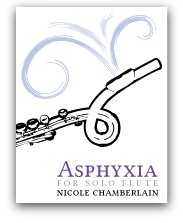 03.28.2016
Commissioned by Dr. Eileen Yarrision to compose a flute choir work for young players for the 2016 National Flute Association COnvention in San Diego in August for Youth Day.


03.01.2016
I will be performing a short concert of my works with Mary Matthews Norton and Matthew Angelo at the 44th Annual National Flute Association Convention in San Diego, CA this August! 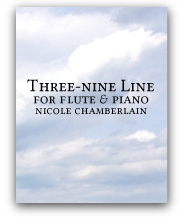 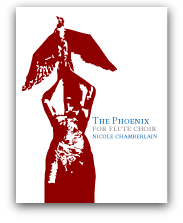 09.22.2015
Commissioned by Oklahoma Flute Society to compose work for unnaccompanied work for their 2016 Collegiate Competition. Premieres at their 2016 Flute Fair on April 1, 2016. 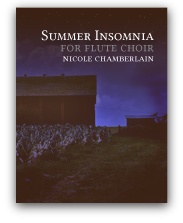 07.30.2015
Commissioned by Dr. Shelley Martinson to compose work for flute and trombone to be premiered Summer/Fall 2016. 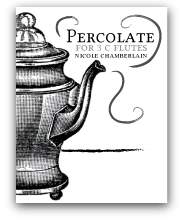 06.24.2015
Interviewed by The Flute View about being a composer and flutist in a live radio podcast. They also asked me to answer some questions via YouTube that you can check out below:

05.24.2015
Commissioned by the Atlanta Flute Club to compose flute choir work to be premiered at the 10th annual Flute Choir Extravaganza on November 15, 2015 at at 3pm Saint Martin's Episcopal School, 3110-A Ashford Dunwoody Rd, Atlanta, GA 30319

05.06.2015
Flutist Denise Rotavera-Krain wrote a lovely article about adventures in learning my piece Chatter for two flutes. You can read the article here - "Preparing Chatter by Nicole Chamberlain - Spitting Encouraged"

12.02.2014
Commissioned by the Flute Choir of Atlanta, under the direction of Kathy Farmer, to compose flute choir work to be premiered 2014-2015 season.

10.09.20014
Fisticuffs has been selected to be performed at the NACUSA National Conference at Georgia State University in November!

5.18.20014
Selected composer as part of the Wilderness Act Performance Series.

5.15.20014
My pieces Elasticity and Ogeechee were featured on the Musically Notable Blog.

3.13.20014
I was interviewed by Tim Crump for the Atlanta Creative Music Podcast. You can hear the interview along with clips of my work by clicking here.

2.28.2014
If you attended my workshop "Beatboxing to a Better Bach" at the 2014 Atlanta Flute Fair and didn't get a handout, you can download the handout here: https://nikkinotes.com/PDF/BeatboxBachBook.pdf Thanks for attending! It was nice to teach to a standing room only crowd!

2.24.2014
I am one of the composers being commissioned by the Clibber Jones Ensemble, but they need a little money to commission all 9 composers. You can donate here.

12.30.2013
Selected as a presenter at the 2014 Atlanta Flute Fair. Presenting "Beatboxing to a Better Bach" workshop.

08.05.2013
Looking for my quartets you heard at NFA Convention this year in New Orleans? You can find them here: 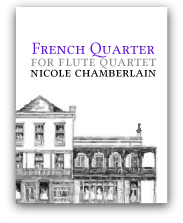 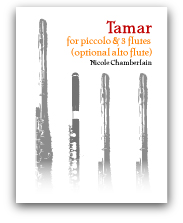 08.02.2013
Article about Perimeter Flutes concert tomorrow and our journey to the NFA Convention next week!https://www.artsatl.com/2013/08/preview-perimeter-flutes-showcase-local-music-saturday-head-orleans/

07.18.2013
Tamar and French Quarter will be performed at the National Flute Association Convention in New Orleans, LA this year!

07.03.2013
Featured on ComposersCircle.com for Trajectory.

03.03.2013
Jammin' out on the contra bass flute this weekend at the JSU flute festival:

01.29.2013
Performing with Perimeter Flutes at the National Flute Convention in New Orleans, LA in August!

01.10.2013
Received commission from Wesleyan Middle School Band under the direction of Dr. Ruthie Colegrove to compose a piece for band that will premiere May 9th!

01.01.2013
Fisticuffs for two flutists and two percussionists is now up for sale. Flutists can finally take out your passive aggressive anger out on those annoying percussionists that always ask for your help to move their heavy high maintenance instruments!

12.18.2012
You can now listen to a live recording of Movement for flute, clarinet, cello, and piano! You can listen to the recording as well as purchase score and parts here.

11.17.2012
Got the recording of the world premiere of Ogeechee! You can listen to the recording as well as purchase score and parts here.

09.26.12
It's getting closer to that time of year where we have to start thinking about Christmas gigs. So how about Away in a Manger for flute and piano?

09.04.12
Hey Flute students! GMEA videos are now up for etude #1 on the Student Resources page.

06.08.12
Hopewell for band and Chatter for two flutes will be performed at the 2012 SCI Region VI Conference at West Texas A&M on October 5-6. See y'all in Texas!

05.24.12
I have been commissioned to compose a piece for the Georgia Symphony Orchestra. The work will be premiered on October 13, 2012

05.01.12
Nicole is the latest addition to Perimeter Flutes. You can check out the new website www.perimeterflutes.com Stay tuned for upcoming performances!

03.05.12
Here are some clips from Chamber Cartel's performance of "songbirdsongs" on Wednesday https://www.chambercartel.com/Chamber_Cartel/Sound/Archive.html Stay tuned for next performance!

02.27.12
I will be performing John Adams "songbirdsongs" with Chamber Cartel on Wednesday (2/29) at 8pm at the Goat Farm. www.chambercartel.com Donations encouraged for admission.