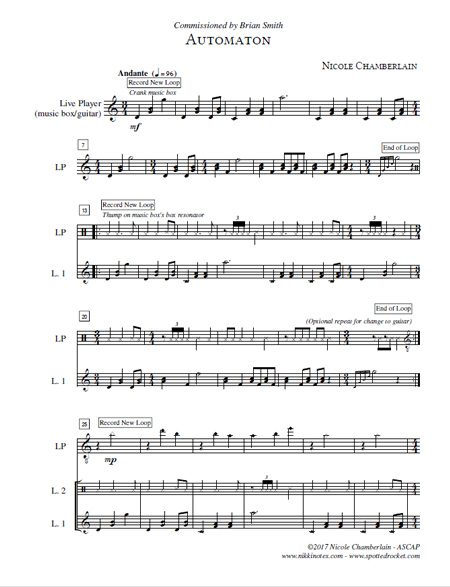 An automaton is a self operating mechanism which follows a predetermined sequence of operations. These precursors to robots came in all shapes and sizes from cuckoo clocks to human-like dolls. Some were charming, but most would give you nightmares. Guitarist Brian Smith commissioned in the piece in 2017 to be performed in future solo concerts. Brian Smith and composer Nicole Chamberlain went to the University of Georgia for their undergraduate degrees in music. Nicole would like to thank Brian for his Finale help during her struggles of cramming her terrible pieces from pencil to digital, and for being her first guniea pig when composing guitar pieces. She would also like him to know she secretly hated that he was in her piano classes.

You can purchase the music box here: here. However, you will have to punch the part into the music box roll provided by the purchased music box.