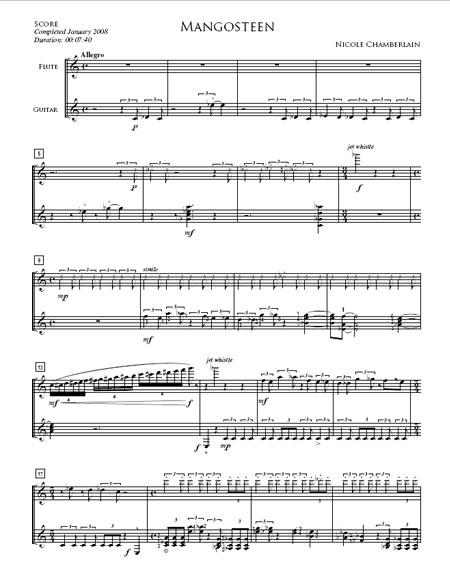 "Mangosteen" was Nicole Chamberlain's first foray into composing for guitar and flute, a combination that she and Brian Luckett have explored since founding duoATL in 2005. Chamberlain titled her work after a Southeast Asian fruit. She wanted to incorporate jazz influence into the work; growing up in Savannah, Johnny Mercer's "Tangerine" was in her mind. The mangosteen's white fuzzy fruit, with its sweet flavor and pungent odor, became a focus for this work. Jazz influence is most notably in the rhythms-in Luckett's words, "a little swing, a little stop time." Extended flute techniques include a stretch of register, use of flutter tongue and a "jet whistle" at the piece's beginning. A section Chamberlain describes as a "broken waltz"-that is, a waltz in quadruple time-features a guitar melody accompanied by multiphonics on the flute. The single-movement work presents two contrasting themes, one faster and one Chamberlain describes as "more like a torch song." Luckett described the mood as "whimsical with dark touches here and there," highlighted by unusual harmonies created when the two parts come together. Open chord voicings as well as a use of space and silence add to the overall effect.

"Mangosteen" was premiered by duoATL at a concert to honor jazz pianist and teacher Ruth MacDonald at Agnes Scott College in April 2008. duoATL also recorded "Mangosteen" in conjunction with Agnes Scott College and the National Museum of Women in the Arts for a compilation CD of music by women composers. The piece was also featured in performance at the 2010 International Conference of Women Composers at Indiana University of Pennsylvania performed by guitarist Irvin Kauffman and the composer.