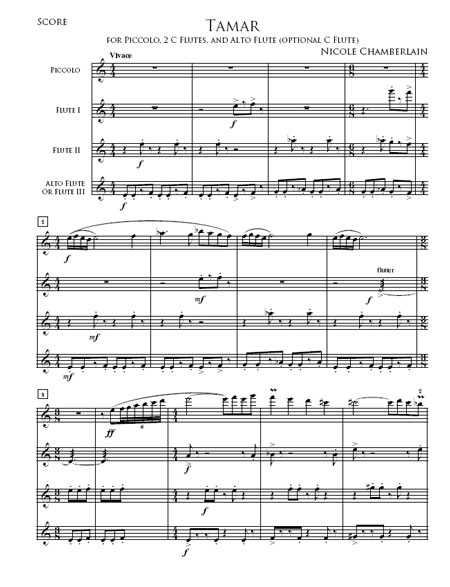 Chatter for two flutes
Trajectory for 2 flutes and cello

"A summer visit to the Republic of Georgia as a teenager and renewed investigation into the music of the Balkans influenced the composer to incorporate derivatives of Balkan rhythms and harmonies into this piece. The name "Tamar" has several different ties to the Republic of Georgia. In Georgian mythology, she was the sky goddess who controlled the weather patterns and enslaved the morning star. In Christianity where it takes the form of Greek Orthodox in Georgia, she was the daughter of King David. In Georgian history, she was the first woman ruler who participated in battle to defend her country. Tamar is truly integrated into Georgian history and culture and made a fitting title for the work.

This piece was not only influenced by the music of a people steeped in history and culture, but also plays on the flexibility and palette of articulation at the flute's disposal. Through extended techniques such as pizzacato and beat boxing, the flute can take on characteristics of the string and percussion families allowing the flute to quickly transition into different styles. This makes the piece a light and fun experience for the players to investigate the modern techniques of flute playing and a good addition to a program they may need a short, uplifting, and exciting break to any concert.