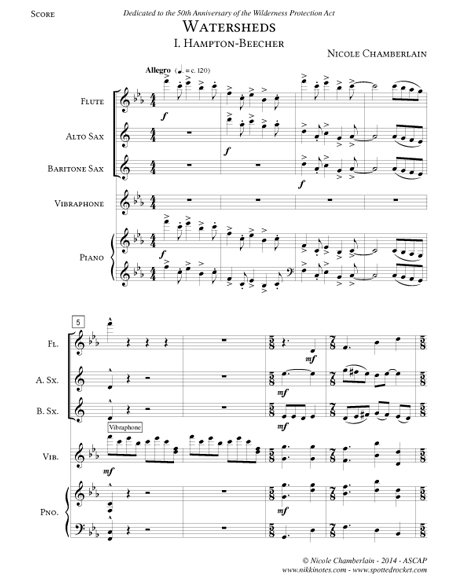 "Watersheds" was written for the Wilderness Act Performance Series in Atlanta, Georgia as part of the 50th Anniversary Celebration of the Wilderness Act of 1964. During the residency, the composer spent days exploring the West Atlanta Watershed Alliance's nature preserves which included Hampton-Beecher Nature Preserve, Cascade Springs Nature Preserve, and Bush Mountain at the Outdoor Activity Center. Each area, even though relatively close in proximity to each other, offered a unique experience. The composer decided it would be best to dedicate each movement to each park.

The first movement is dedicated to the Hampton-Beecher Nature Preserve. Named after the vibraphonist Lionel Hampton, this movement highlights the vibraphone. This park is used by visitors as a place to get exercise and the music reflects hurried activity by the visitor, however, its not long before a visitor is overcome by the beauty of the giant trees that seem to spring out of no where. One finder herself in a state of wonderment to find such a natural beauty in a metroplis full of people.

The second movement, Cascade Springs, investigates the past life of Cascade Springs Nature Preserves. Cascade Springs was the site for the beginning of the fall of Atlanta during the Civil War, which is in the 150th anniversary. "Marching Through Georgia" heard in the piccolo and the bass drum recalls cannon fire. The thrasher bird calls, state bird of Georgia, can be heard thoughout the movement.

The final movement, Bush Mountain, starts with jazz and urban musical themes to represent the hustle and bustle of life outside the park, then the themes die into the activity inside the center, and dissipate into the nature sounds as you movement from the forest to the field. A firecracker sound propels you back into the community, but this time altered under the influence of the sounds found in the wilderness in the parks as the composer felt upon first visit to Bush Mountain.

The goal of this piece is to illustrate how nature can impact daily lives, even in the city. Our lives become hurried, tense, and thoughtless in the grind of staying ahead where every minute is booked. Time in nature offers a chance to slow down, be quiet, listen, relax, and reflect and help us grow as individuals and unite as a community.