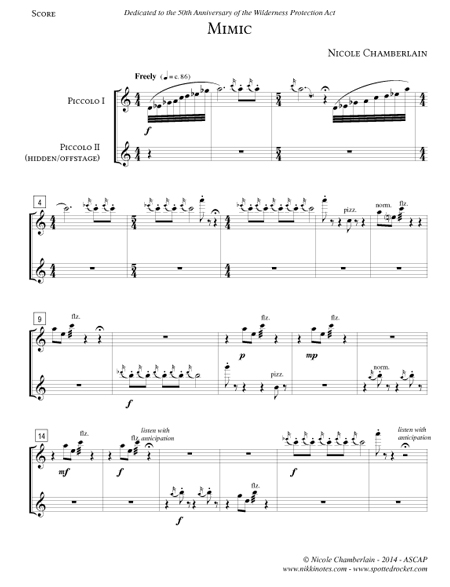 Mimic was written for the Wilderness Act Performance Series in Atlanta, Georgia as part of the 50th Anniversary Celebration of the Wilderness Act of 1964. During the residency, the composer spend days exploring the West Atlanta Watershed Alliance's nature preserves which included Hampton-Beecher Nature Preserve, Cascade Springs Nature Preserve, and Bush Mountain at the Outdoor Activity Center. There are abundance of birds living in the parks which became the inspiration for this piece for two piccolos.

As a flutist and piccoloist, the composer spends quite a bit of time practicing. On nice days she practices with the windows open. It feels as though sometimes the birds respond to the piccolo. The idea blossomed into composing a piece of two birds responding to each others calls. Mimic uses calls from the Eastern Towee, Tufted Titmouse, and the Brown Headed Nut-hatch to capture the spirit of the native Georgia birds responding to one another. One bird is seen, but the other bird is hidden and distant.