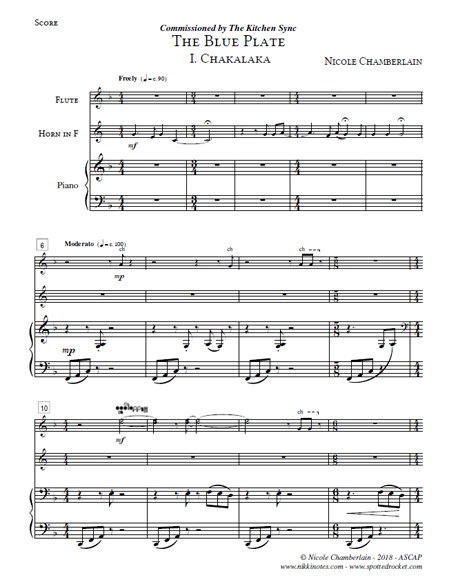 The Blue Plate was commissioned by the flute, horn, and piano ensemble The Kitchen Sync. The ensemble consists of Dr. Katherine Emeneth, Dr. Catherine Kilroe-Smith, and Dr. Akiko Iguchi. Each member of the ensemble is from a different country, and requested the music reflect their heritage. The first movement, Chakalaka, represents Dr. Catherine Kilroe-Smith's home country of South Africa. Chakalaka is a spicy tomato bean relish traditionally served with bread, pap, samp, stews, or curries. Woven through out the movement is the folk song "Shosholoza" which was sung by Ndebele migrant workers that were working in the South African mines:

In the second movement, Sata Andagi, Dr. Akiko Iguchi's homeland of Japan is the influence of this movement. This movement is influenced by the music found in Okinawa, or shim-uta. In the opening theme, the pianists plucks the inside of the piano to mimic the sanshin, and instrument used often in shim-uta. Sata Andagi is a type of sweet deep fried doughnut found in Okinawa and seemed appropriate for this sweet music represented in the movement.

In the final movement, Grits, not only is Dr. Katherine Emeneth's American roots are represented, but ties together all three members and the composer's ties with Athens, Georgia. Home of the University of Georgia, "The Battle Hymn of the Republic", can be heard throughout the piece. Georgia has also had its history with the civil rights movment which is always at the forefront of issues, you will also here "We Shall Overcome". Lastly, since this is a movement for Dr. Emementh, you will also hear "Stars and Stripes Forever". Grits is a a dish of coarsely ground corn kernels boiled with water or milk. You haven't lived in the south unless you've eaten them or a part of your scrappy personality.